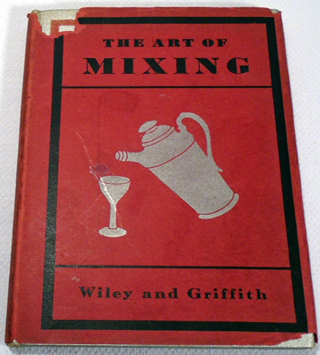 First Edition. Original limp tan leather, blindstamped at front cover, 5" by 3 1/2", 48 pages. Fabulous little volume of cocktail recipes, one of only two recipe books to include the Liberal Cocktail. Two recipes are food items: Clam Cocktail and the Oyster Cocktail. Three of them are drinks that are technically not cocktails: Chocolate Cocktail (a flip), Coffee Cocktail (flip), and the Soda Cocktail (a soft-drink). The other forty-five recipes are true cocktails. "No cobblers, Collinses, coolers, fixes, fizzes, highballs, juleps, punches or sours in it. The majority of today’s so-called ‘craft cocktails’ (most of them actually sours or other short punches) would not have passed muster to get into the Gorham Cocktail Book." [Andrew Willett, Elemental Mixology] A lovely and scarce title. Very Good, front pastedown paper has partially detached from inside cover, tear to rear pastedown paper, bit of leather loss at top fore-edge corner of rear cover. Item #31260 First Edition Thus, "Completely Revised and Greatly Enlarged into an Unabridged Encyclopedia of All Popular Beverages". Original yellow printed wrappers, 7 1/2" by 5 1/4", 271 pages. WorldCat lists five library holdings for this edition. This title was originally published in 1891, with the title “Cocktail Boothby’s American Bar-Tender” Additional editions were published in 1908, and 1930. By this last printing the original four hundred recipes had expanded to seventeen hundred concoctions. "Recipes included Absinthe, of egg whites and/or yolks, Alexanders made with Gin and Coffee Ice Cream, many vodka concoctions, dozens and dozens of recipes with a Martini base, French 75’s without Champagne, Gin is the dominate spirit, numerous famous recipes with other names, sweet and sour, bulk recipes for up to twenty people, Hurricanes with Gin and Crème de Menthe." Almost Near Fine, attractive volume, dime sized abrasion at top front wrap from crayon price being partially removed. Item #31341 First Edition. Original illustrated cloth over boards, 80 pages, octavo. "A Practical Handbook of Polite Drinking." Cocktail recipes, party-giving tips, and hangover remedies, published when Prohibition was still the law of the land. The authors offer advise on what mixture of herbal extracts will give your bathtub gin the most authentic flavor, which got them in trouble with the U.S. Attorney for the Southern District of New York. Good, covers rather discolored from soiling and stains, light stain to fore-edge margin of first twenty pages, contemporary gift inscription and drawing at front endpaper. Item #31269 First Edition. Original brown boards, approximately 180 pages, octavo. Scarce Hawaii published cocktail recipe book, with no copies found on WorldCat or in the cocktail blogosphere. The forward states the Pop was a member of the Bartenders Local No. 86 in Reno, Nevada. "This guide book is designed to give you the finest recipes and how to make them in the quickest manner. I dedicate this book to all my buddies and shipmates of World War One and World War Two". Very Good, some modest edge wear. Item #31251 First Edition. Small octavo, original illustrated boards, 110 pages, illustrated. A very uncommon cocktail collection with only four library holdings found on WorldCat. Mcelhone was a defining figure in early 20th-century bartending, most famous for his role at Harry's New York Bar (in Paris), which he bought in 1923. He worked at Ciro's Club in Deauville and the Plaza Hotel New York. He is often credited with inventing many cocktails, including the Bloody Mary, Sidecar, the Monkey Gland, the White Lady, and an early form of the French 75. "Barflies and Cocktails conveys a whiskey-addled sense of zany humor that seems tied to the Roaring Twenties, when the book was first published. The running conceit of the book has to do with the fictional association of International Bar Flies, the rules of which include the admonition that, “Those seeing cerise cats with purple ears should keep it to themselves.” [Peter Meehan. New York Times, 2008] This copy inscribed at title page "Best wishes / Harry". I can not locate another McElhone signature to compare this inscription to, but we have no reason to believe its not authentic. A Good copy, lacks last leaf (111/112) which is an ad for The Boulevardier and photo illustration of Harry's Bar, cracked at front hinge (likely repairable), some lower page corners a bit dog-eared. Item #31231 First Edition. Large octavo, original blue cloth, 362 pages. Uncommon history of all things beverage, including chapters on liquor, beer, tea, etc. Includes a chapter titled: American Drinks, with three pages of recipes including Sleeper, Bishop, Locomotive, Pousse l'Amour, Blue Blazer, Black Stripe, etc. From the text: "The great authority, probably the greatest authority, on this interesting subject is a gentleman who, with the true modesty of genius, allows himself to be known only by the pseudonym of Jerry Thomas. Formerly a bar-tender at the Metropolitan Hotel, New York, and the Planter's House, St. Louis, he is said to have traveled over Europe and America in search of all that is recondite in this branch of the spirit art. His very name, says one of his admirers, is synonymous in the lexicon of mixed drinks with all that is rare and original. Among, the chief American drinks are, being alphabetically arranged, cobblers, cocktails, cups, flips, juleps, mulls, nectars, neguses, noggs, punches, of which there are at least three score, sangarees, shrubs, slings, smashes, and toddies". Found in the following references: Straight Up Or On the Rocks, The Story of the American Cocktail by William Grimes; The School of Sophisticated Drinking: An Intoxicating History of Seven Spirits By Kerstin Ehmer, Beate Hindermann; Absinthe The Cocaine of the Nineteenth Century By Doris Lanier; A Bibliography on Grapes, Wines, Other Alcoholic Beverages, and Temperance By Maynard Andrew Amerine, Axel E. Borg; Nearly Very Good, cloth well worn at spine ends, wear to cover corners, some pages roughly opened or unopened. Item #31238 First Edition stated. Uncommon volume of cocktail recipes, presumably pirated from "Cocktails :How to Mix Them" by "Robert late of the Embassy Club in London". Very Good, some foxing to cloth and foxing to page edges, in Good dustjacket, few coin sized stains, some nicking and edge wear, quarter sized chip at upper rear panel. Item #31244 Second Edition. Original illustrated wrappers, 9 by 6 1/2 inches, 103 numbered pages. Extremely scarce second edition of this title which Blogger's consider to be the German opus of mixology. WorldCat locates no copies of this 1913 printing. Includes early recipe for the Imperial Cocktail (gin, dry vermouth, maraschino) with no gin, but with a few dashes of absinthe included. American mixed drinks, and the chief German, English, French and Russian as well. Also Punch Bowls, Cups, etc. The 1909 printing is the first to include The Fedora. Seutter was a German cocktail author who gained extensive experience traveling America while working in various bars throughout the country. Very Good attractive volume. Item #31326 First Edition. Original card stock, blue and red printing at both sides, 8 1/2 by 11 inches. Extremely scarce, no copies found. One side of the card is printed with instructions for making non-alcoholic Juleps from the ready-to-use one ounce sirups using carbonated water at the fountain or plain water at the cooler. The verso is printed with Favorite Julep Formulas including both Standard Formulas and Special Formulas. The formulas or recipes including Julep Ice Cream Soda, Julep Phosphate, Arctic Freeze etc. There is a small hole at the top of the card with print: “HANG UP”. Scarce. Good, two corners chipped, other corners bumped, short tears and creases. Item #31248