Earl Manz of Yesterday’s Gallery, member of the ABAA, and Michael Manz of Babylon Revisited Rare Books are a father and son team who share the same enthusiasm and passion for the literature of the Jazz Age and Depression Era. Earl began selling rare books and prints while still a law student at Harvard University, selling his coin collection in favor of old books with color plates. His nearly forty years in the business have earned him only the highest respect from his colleagues and nothing but praise from his dedicated customers.

When Earl started to bring his young son Michael along to antiquarian book fairs way back in the 1980’s, another bibliophile was born. Michael has been seeking out and selling rare books since before the sixth grade, unearthing rarities for his customers with an uncanny sense for finding long lost books. He has built up a strong base of loyal customers who appreciate his honesty and dedication to his chosen profession. 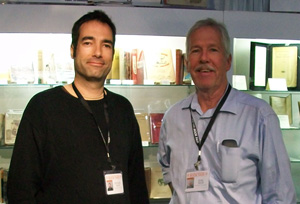 Together they strive to provide a large, high quality, and diverse collection of fiction published primarily before the Second World War and with their original dustjackets. With over 8,000 such titles in their inventory, it is one of the largest ‘for sale’ collections of such material in the world. While their specialty is Jazz Age and Depression Era literature, they also maintain a growing collection of Children's and 19th Century Literature. They pride themselves on providing accurately described, high grade, and difficult to locate titles in all fields of literature.